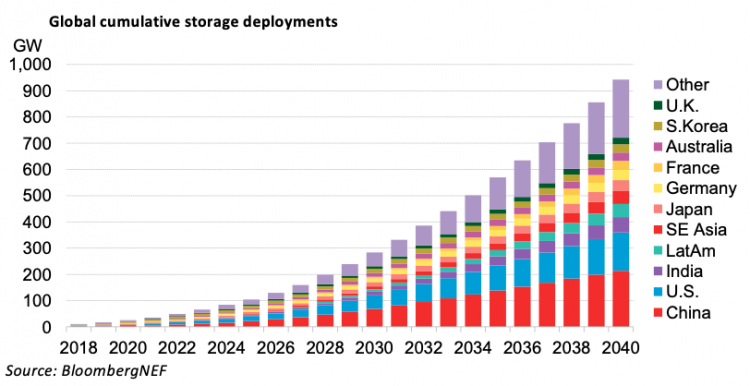 The global energy storage market will grow to a cumulative 942GW/2,857GWh capacity by 2040, attracting US$1.2 trillion in investment, caused by sharply decreasing battery costs, according to a Bloomberg NEF (BNEF) report.

BNEF's latest'Long-Term Energy Storage Outlook'projected that battery costs would drop by another 52% by 2030. Importantly, the firm claimed that this would"transform the economic case for batteries in both the vehicle and the electricity sector".

Yayoi Sekine, energy storage analyst for BNEF and co-author of the report, said:"We have become much more bullish about storage deployments since our last forecast a year ago. This is partly due to faster-than-expected falls in storage system costs, and partly to a greater focus on two emerging applications for the technology – electric vehicle charging, and energy access in remote regions."

China, the US, India, Japan, Germany, France, Australia, South Korea and the UK will dominate with two-thirds of the market by 2040. For now, South Korea takes top spot but will be overtaken by the US in the early 2020s, only to be surpassed by China from that decade onwards. BNEF even highlighted developing countries in Africa as seeing rapid growth in battery storage, with utilities recognising the value of combining solar, storage and diesel in remote regions as an alternative to extending the grid or just using fossil fuel-based gen-sets.

Those interested in the use of aggregated behind-the-meter energy storage in the place of utility-scale applications will have to wait for years before regulatory frameworks in some countries fully allow it, said BNEF. The EV market will also totally dominate the stationary storage market and will have a far greater impact on the supply-demand balance and prices for metals such as lithium and cobalt.

Logan Goldie-Scot, head of energy storage at BNEF, added:"We see energy storage growing to a point where it is equivalent to 7% of the total installed power capacity globally in 2040. The majority of storage capacity will be utility-scale until the mid-2030s, when behind the meter applications overtake."