For 2years,it's on the topic that PERC has high efficiency and will be on the center of solar cell technology.Major manufacturers states that they would either increase their manufacturing capacity in PERC cell technology in order to produce high power and high efficiency solar panels, switch complete manufacturing capacities to this technology or achieved efficiency records. To help you weather the flow of information, discern the right from the sales pitch, we prepared this summary of the key information to know about the technology.

As of today, the vast majority of crystalline solar cells produced follow the structure presented hereunder.

The objective of scientists being to get the most of electrons out of the solar cells, the PERC architecture essentially enables to improve light capture near the rear surface and to optimize electrons capture.

3. PERC and non-PERC?
Under the acronym PERC, we actually also find the solar cells technologies named PERL, PERT, PERF. Even if initially not considered in the nomenclature of PERC, they are now usually considered as being part of the same family.

4. What's the interest of the technology?
The main advantage of the PERC cell structure is that it enables manufacturers to achieve higher efficiencies than with standard solar cells which are reaching their physical limits. With the current state of the technology, it is possible to achieve up to 1% absolute gain in efficiency. While there are more steps in the manufacturing process, the gain in efficiency enables costs decrease, also at the system level. We should always keep in mind that the Holy Grail is to improve efficiency while reducing costs at the same time. And solar cell efficiency improvement is a contributor to the reduction of costs.
So this cell architecture is considered like presenting one of the best potential for producing high efficiency solar panels at competitive prices.

5. Is it new?
The PERC architecture is actually not new at all. First evocation of the technology traces back at the University of New South Wales in Australia in 1983 and the first paper [1] has been published in 1989. Because this concept of cell offered the best potential to reach high efficiency, the UNSW used it to achieve its multiple world records of efficiency that it brought close to 25% [2]. The two others competing technologies were the Back Contact technology, popularized by SunPower, and the HIT technology commercialized by Panasonic.

6. Why now?
It is interesting to underline that the standard solar cell architecture has been in use since the middle of the 80's. Since then, the technology went through incremental improvement, with better pastes to form front contacts, thinner contact fingers, optimized anti reflective coating… It took almost 30 years to the industry to almost catch up with the efficiencies achieved at the research level.
The following graph sums up the historic quest of the solar industry to improve its technology. 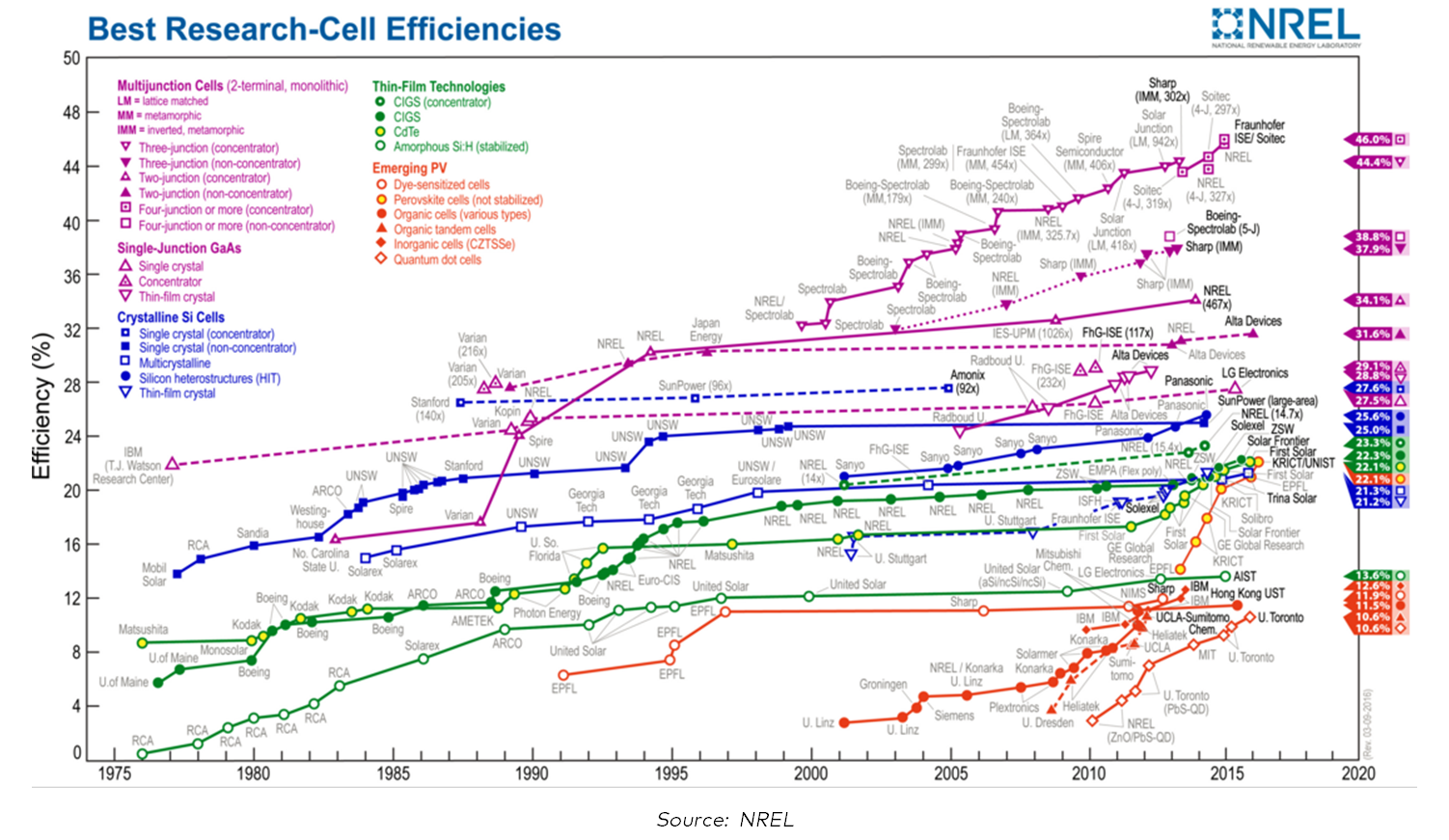 As stated earlier, there is always a gap between the performances achieved at the research level and what is achieved in mass production at the industrial level. Thus if PERC cell technology emerges now, it is mainly for economic reasons. Indeed, industry must always compromise to achieve economically and technically viable concepts. During 30 years, the steady incremental improvements brought to the standard cell technology were economically and technically feasible. Now that the standard concept achieves its limits and that  technical know-how is available along the value chain to introduce PERC technology, it can constitute a new viable platform to manufacture high power and high efficiency solar panels.
As anticipated by ITRPV, a body that gathers a set of manufacturers at the different steps of the value chain and that works on technology trends, the PERC technology will progressively take the biggest market share. Because this is the sense of history in the PV industry to get better and better, sooner or later, most of the panels installed will feature this technology.

7. Does PERC technology intrinsically feature better weak light performance?
In parallel to the development of the PERC technology, we have seen appearing on datasheets arguments related to improved performance under weak light. It is then legitimate to wonder if those two facts are related. While it is true that you will find PERC based modules with improved weak light performance, it has nothing to do intrinsically with the PERC cell technology. All the cell technologies have the potential to feature an improved performance under low light conditions, and we will address this topic in a series of essay.

8. Challenges with the technology
Like for any new technology, the challenge behind the PERC technology is to be able to scale up the technology while controlling the process. At MOTECH(cells AHONY uses),they always value know-how and there is definitely to be able to manufacture these cells. It's a leading cell manufacturer in Taiwan,now the cell efficiency is over 21%.Among the challenges related to PERC technology, two are more susceptible to impact the owner of a panel equipped with this technology.
The first one is related to Light Induced Degradation. LID is this effect that causes a module to lose a percentage of its power after first exposition to light. It explains why manufacturers with linear warranties never guarantee 100% of the power after the first year. Due to the higher doping levels commonly applied in PERC cells, the negative effect due to LID is increased with PERC technology compared to standard cells with an Al-BSF.
There is also a topic around Potential Induced Degradation. There have been numerous papers and articles raising this question, and especially for polycrystalline PERC. It is not trivial insofar as this kind of defect can completely damage the performances of a power plant. The best recommendation we can do regarding this issue is to make sure that the modules you supply are granted the certificate according to IEC TS 62804 for PID resistance and that there is trust in the consistence the manufacturer applies to its material selection and processes to ensure its production is PID free.