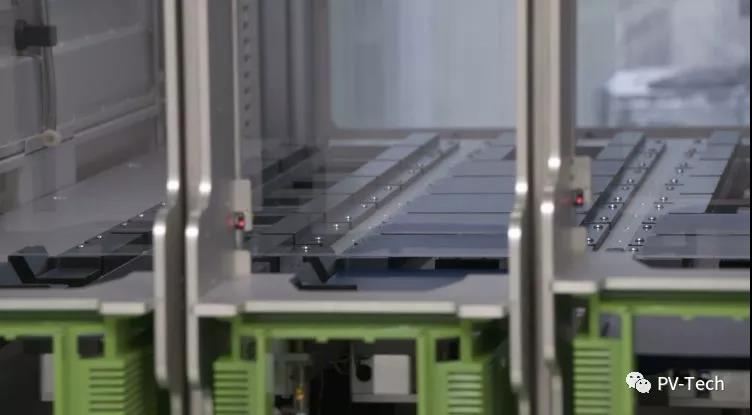 SunPower provided more details on the planned capacity expansions of the new offspring in its fourth quarter earnings call.

With the spin-off of most of its solar cell and PV module manufacturing operations to a new entity, Maxeon Solar Technologies (MXT) expected in the second quarter of 2019, SunPower provided more details on the planned capacity expansions of the new offspring in its fourth quarter earnings call.

Tom Werner, SunPower CEO and chairman of the board spoke at length about almost doubling total capacity by the end of 2021, which illustrated in its conference call slides (see below). 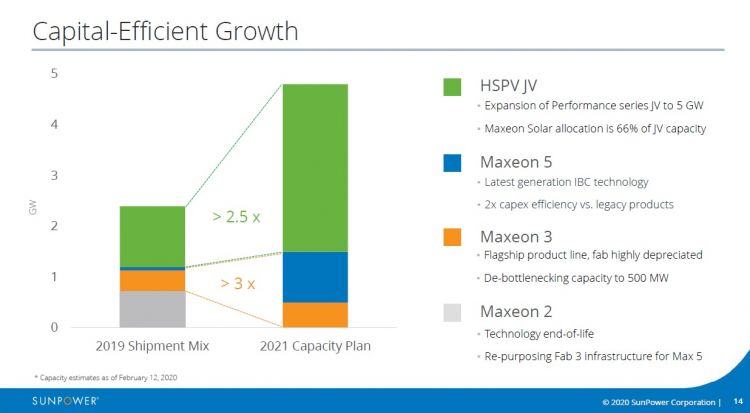 What is not clear is whether this meaningful increase in capacity for P-Series has anything to do with expected demand from SunPower?

Granted, the slide is less than user friendly and lacks detail but does try and give the impression that the high-efficiency Maxeon IBC (Interdigitated Back Contact) solar cell capacity would increase, notably the latest generation IBC technology, formerly known just as NGT (Next Generation Technology) now relabelled as Maxeon 5 technology.

However, the slide does highlight that MXT is expected to continue with SunPower’s previous plans to stop all production of the legacy Maxeon 2 IBC cell technology, which many will be familiar with in the C&I and utility-scale PV power plant sectors as this was, for many years, the workhorse cell used in SunPower’s E Series modules.

By the end of 2021, MXT is expected to have completely stopped Maxeon 2 cell production at its Malaysian Fab 3 and have ramped Maxeon 5 production significantly.

It should be noted that the HSPV JV is not the only P-Series module manufacturer as SunPower is keeping the Hillsboro, Oregon facility under SunPower ownership so it has a token (160MW to 200MW estimated) US manufacturing operation. SunPower is also retaining its NGT pilot line at its HQ in California to be used for some the R&D on Maxeon 6 technology.

As the slide shows, SunPower noted that the HSPV JV was planning to expand P-Series cell and module capacity to 5GW, with SunPower have allocation rights of 66% of the output. It should be noted that current capacity is approximately 1.2GW of PERC cell capacity and 2GW of capacity for module assembly. The company did not mention any expansions of solar cell capacity at HSPV JV.

In the earnings call,  Tom Werner attempted to fill in some of the holes in the slide covering these expansions. He noted the following:

“This slide shows how we plan to almost double capacity by the end of 2021. First, we are debottlenecking Fab 4 to allow for expansion of Maxeon 3 to over 500 megawatts of capacity. Secondly, we are converting our legacy Maxeon 2 lines and Fab 3 to Maxeon 5. Funding from TZS as part of the Maxeon Solar spin-off transaction will allow conversion of further lines, and we expect to have four Maxeon 5 lines in place by the end of 2021 with a capacity of around 1 gigawatt.”

In relation to Fab 4 in the Philippine’s, SunPower has previously provided quarterly capacity figures as part of its supplementary metrics sheet with earnings calls, indicating that nameplate cell capacity stood at approximately 350MW, although this does not include higher potential capacity, due to cell conversion efficiency gains or previous debottlenecking programs at Fab 4.

This would mean that without new production equipment and just through new debottlenecking programs at Fab 4, MST will be increasing Maxeon 3 cell capacity by as much as 150MW by the end of 2021.

Tom Werner's claims that the expansions equated to around 1GW in relation to Fab 3 in Malaysia, are a little bit more difficult to explain.

Fab 3 had a nameplate capacity of around 800MW for its Maxeon 2 IBC cell technology, before the equipment started to be repurposed and new equipment acquired to support the transfer of the plant to Maxeon 5 IBC technology.

Perhaps, Werner was referring to a further two new Maxeon 5 production lines being added by the end of 2021 to supplement the 800MW of repurposed Maxeon 2 production lines.

However, given the fact that Maxeon 5 uses larger wafer sizes and much higher cell conversion efficiencies, no new production lines maybe required, just the supplemental production equipment as per the first two lines being brought online producing the Maxeon 5 IBC solar cells. 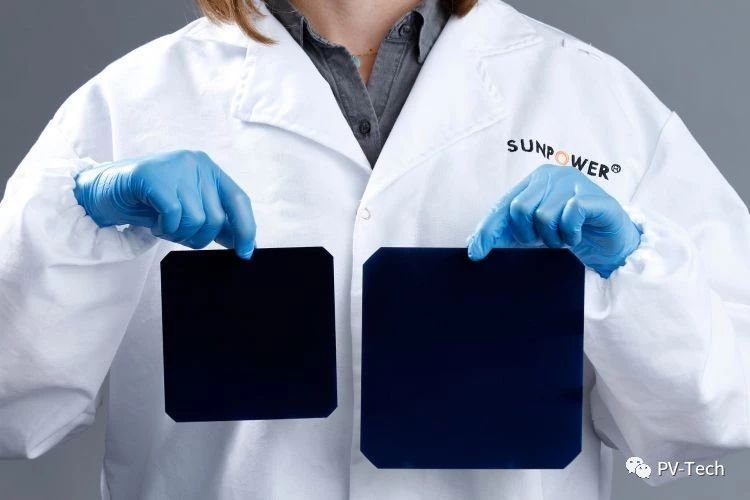 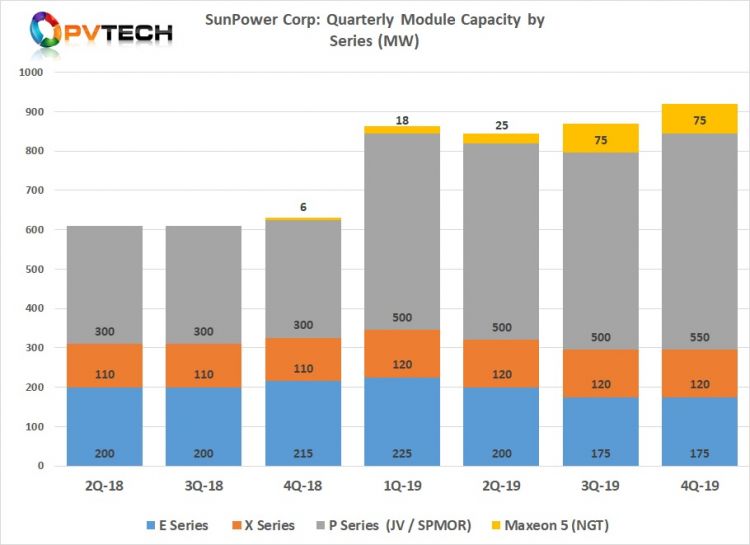 The points being made here are that there is very little additional capacity being added for SunPower’s IBC technology in general and these small additions are not through completely new production lines.

Although there is a real need to shift IBC cell production to larger wafers, lower production costs and higher conversion efficiencies to stay ahead of PERC, TOPcon and HJT cell technologies, its seems that SunPower doesn’t need any meaningful extra capacity for its IBC technology, certainly not for the next two years and hasn’t required extra capacity for at least the last three years.

Werner also noted in the call that SunPower’s, “IBC technology strategy is to maintain a relative performance lead of around 20% versus commodity products. This performance gap creates significant market differentiation and enables premium pricing.”

Wegner also noted in the earnings call that, “HSPV JV is slated to expand P-series capacity by 3 gigawatts, increasing total capacity to around 5 gigawatts. Our P-Series supply allocation from the JV will therefore be increased to over 3 gigawatts.”

The expansion of P-Series production shouldn’t need any clarification or analysis as it is clearly a major capacity increase.

However, what is not clear is whether this meaningful increase in capacity for P-Series has anything to do with expected demand from SunPower directly?

Based on the business deal with MST, Maxeon Solar will focus on manufacturing products but also will market high-efficiency solar panels under the SunPower brand into the global marketplace, some of which would include SunPower’s existing dealers and users already established across Europe, Japan, Mexico and Australia.

MST will also bring module into North America via a multi-year exclusive supply agreement with SunPower, once the spin-off has passed all legal requirements.

The news comes from pv-tech.org.