These panels are now more plentiful than ever and come in an endless number of configurations.

There are incredibly inexpensive options that are attractive at first blush, but when you dig deeper the quality of these panels and their assembly process leave much to be desired. 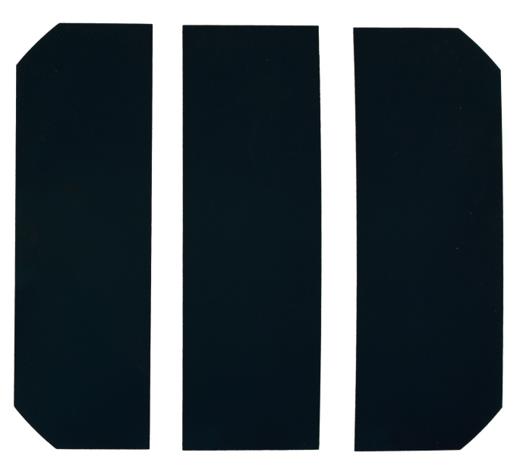 SunPower produces, tests and grades whole solar cells. They do not make 1/2, 1/3 or 1/6 cut cells. Other panel assemblers and third-party companies will take SunPower whole cells and make 1/2 cut, 1/3 cut and 1/6 cut cells. 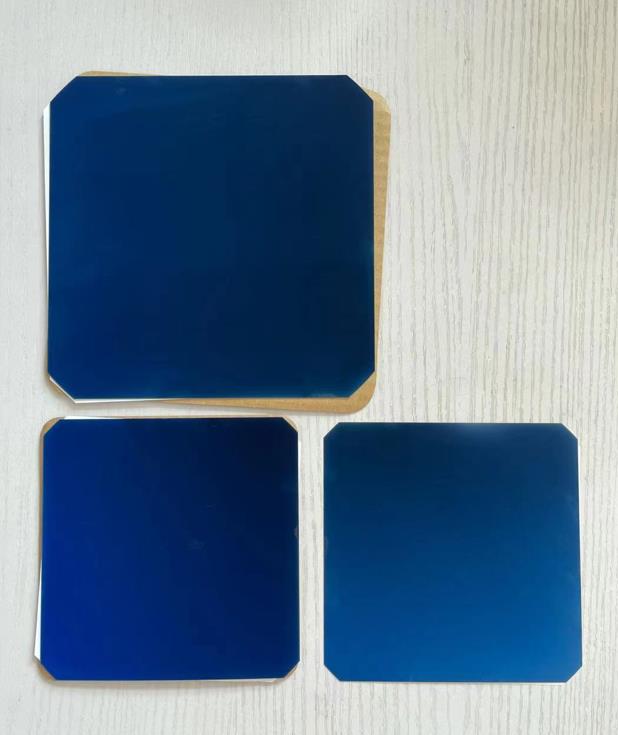 The advantages of using cut cells include flexibility in output voltage and form factor.There are two pictures of foldable solar kit eMobi F3*40w. 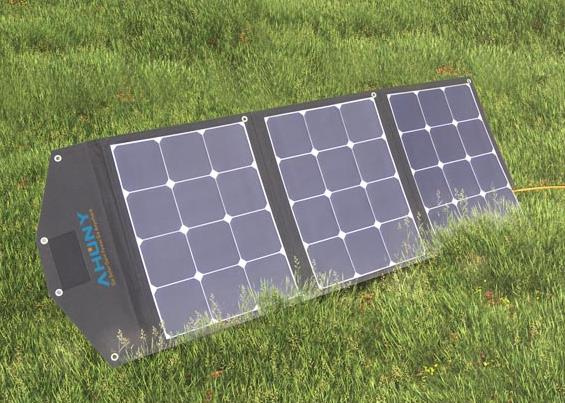 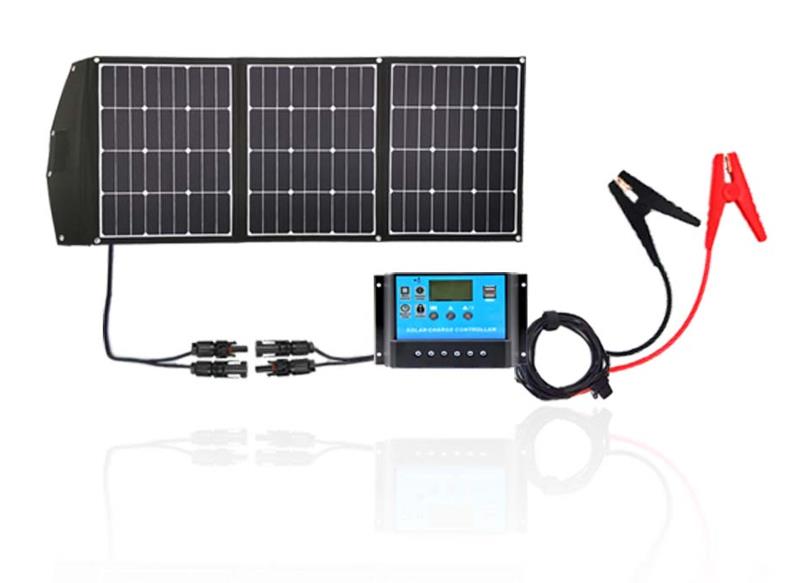 SunPower produces a 23.7%-24.2% efficient 3.6-3.74w watt cell, which is tested before assembly to ensure it meets specification and is well matched in performance to other cells in the panel.

When a solar cell is cut the active area of the cell decreases, due to the kerf (width) of the laser cut, typically 0.05mm. Based on the kerf of the laser used to cut the cell the remaining active area will be about 99.6% of the initial. That reduces cell efficiency from 23.7% to 23.6%. This is a small decrease.

For a full cell with two cuts, creating 1/3 cut cells, there will be four defect regions, one on each side of a cut. Taking the 0.05mm *4 for each side of the two cuts the active area is now 99.3% of the total area left. This reduces the cell efficiency to 23.54 %.

Mostly based on easy to calculation,we cut cells actually cut the cell into three equal width pieces and do not account for the area missing due to the cropped corners of a full cell. Since the cells are series connected this creates a current imbalance between cells based on cell active area and limits the power output of the cells to the smallest one. The loss of effective area due to cutting the cells in equal widths instead of equal areas is about 0.9%. This reduces the cell efficiency to 23.18%.

These theoretical losses have proven to be significantly greater in field testing. Measuring the output of each of the 1/3 cells in a solar panel shows that the cut cells produce significantly less power than their equivalent full cell.

Each of the cells in a panel is connected in series, so the lowest performing cell will limit the current output of the entire array.

Matching cell performance is required to optimize overall panel performance. A weak cell cannot be overcome by putting a few exceptional cells in a series string of cells. A 36 cell string with two to three cells producing less than 0.5 watts cannot be fixed by adding 10 cells producing 1.1 watts.

If cost is a major concern then a supplier of such panels will receive similar lots of cells and potentially use some lower performing cells in finished panels.

Most of these cracks are impossible to see with the human eye. Pictures of cracks can be taken by EL machine,which is professonal to test

solar module defects,when the cells is good,the EL shows white,the cells has lower current or have inner crack,there will be a black line or the whole cells shows dark/black.

An infrared picture of a 32 cell panel (purchased online) is shown in Figure 1. This picture shows the defects that were induced mostly during the cutting and laminating process.

This was a 26 watt panel mounted on a steel frame that produced only about 20 watts at full sun. At 20 watts the panel's efficiency would only be 16.9%, not 22% as stated on the seller’s website. A picture of a PowerFilm crystalline silicon panel using whole cells is shown in Figure 2. 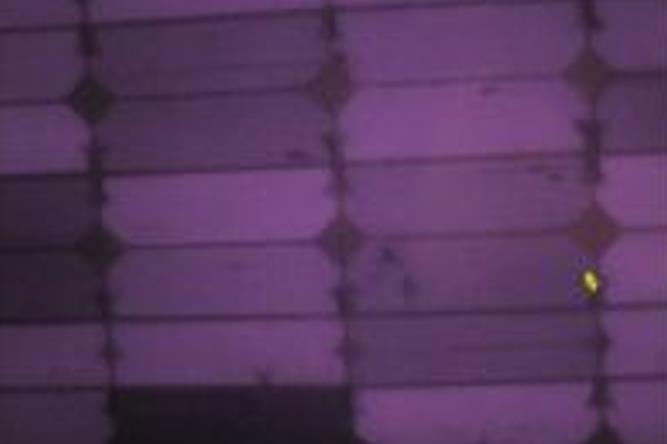 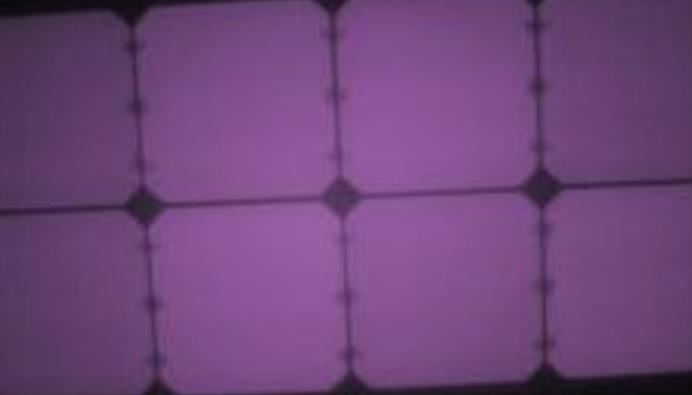 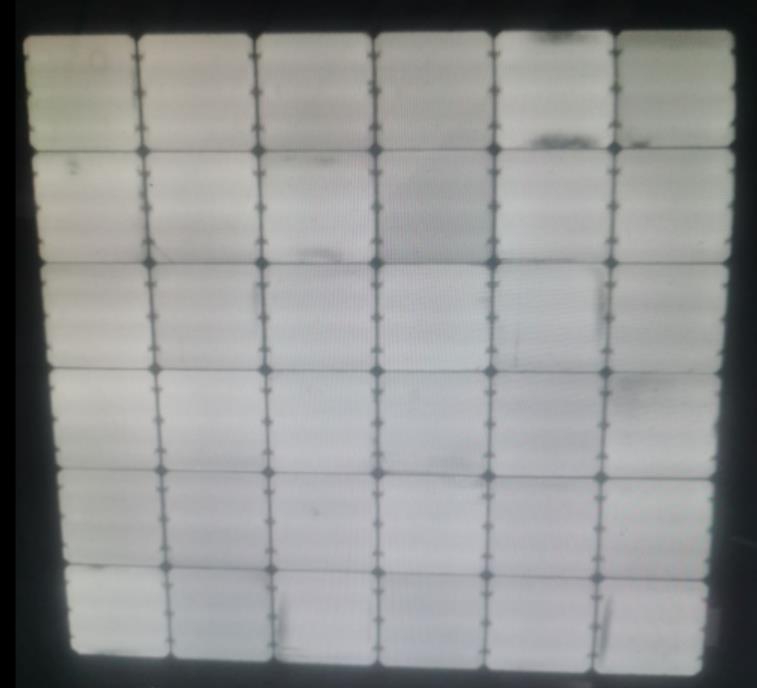 A standard SunPower cell has three contact points on each end of a cell. As Chinese producing developed,more and more tooling are used for producing,at the same size,interconnect reliability are strengthened too.

In addition, the SunPower “dog bone” connector is designed to provide a low-stress connection to the wafer and if manufacturers do not use the SunPower "dog bone" then undue stress is placed on the connection, which can increase interconnect failure.

The "dog bone" has cut out reliefs that allow expansion and contraction from cell to cell without adding mechanical stress to the cells contact points.

In addition, 1/2 and 1/6 cut cells will have the one set of contacts cut in half, reducing the size of the soldering pad. Although less critical on 1/2 cut cells this becomes even more significant on a 1/6 cut cell’s interconnect reliability.

Besides lamination, the greatest chance for edge defect induced cracks is due to thermal cycling and thermal shock over the lifetime of a panel.

2.avoid shading and get maximum power

SunPower cell has the best weak light performance at the moment.

For some application like bimini,RV,when there are cloud or tree shade it,the regular whole cell panel voltage will decrease sharply.

If a panel are made into cut cells,the panel will do parallel,even part of it are shaded,the other part can still keep the voltage high,then do not decrease the whole system voltage.The power will deccrease much less than whole cell system. 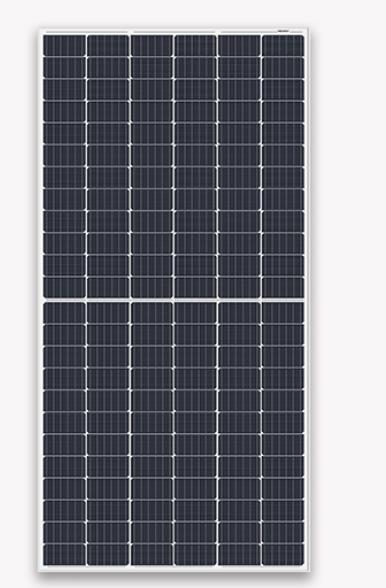 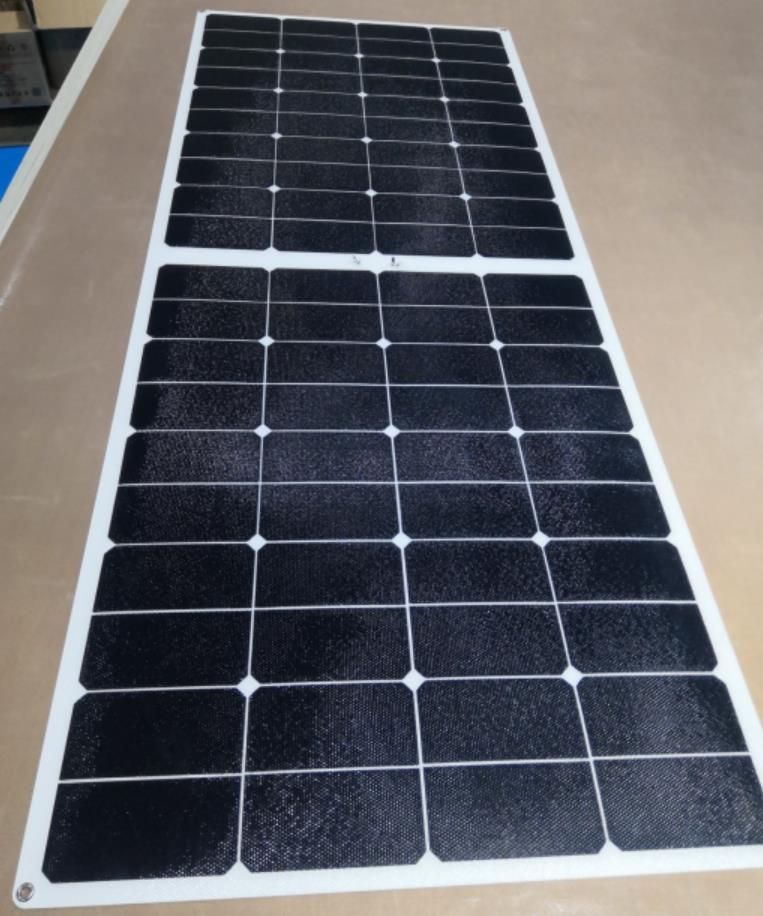 As producing technology is developed,now the half cell solar modules are more and more popular.